BACK TAXES HELP
Home / Tax Law Changes / Is Tax Policy Responsible for Spike in US Renunciations?

One thing that is changing over the last few years is that more Americans are giving up their US citizenship. This trend coincides with not only relatively recent legislation that discourages expatriation and foreign bank accounts, but also proposed legislation that makes expatriation more expensive and tax compliance mandatory for an American’s right to passport.

How Many People Are Renouncing their US Citizenship Each Year?

The IRS has been required to report quarterly in the Federal Register individuals who officially give up their US citizenship since 1996, with the Department of State providing most of that information. This true numbers are hard to accurately measure because not all US citizens who leave formally renounce their US Citizenship, and many are critical of the way the data is reconciled. However, we can still see a trend below illustrating growth. In fact, the number of US citizens expatriating in 2012 is greater than the sum of those that did so from 2007-2009. The 2012 estimate is based off of what immigration officials expect according to a NY post article. 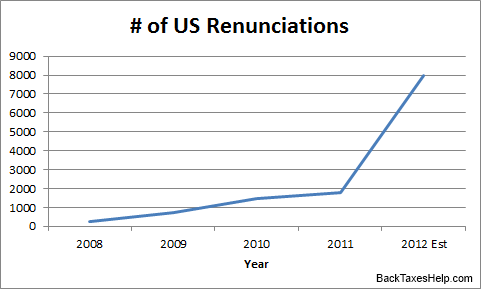 Are Taxes the Primary Reason for Expatriation?

Taxes seem to be the common reason why many renounce their US citizenship. After all, as wikipedia clearly states, the “United States is the only country in the world which taxes based on citizenship rather than residency, on worldwide income or estate of individuals, in the same manner as residents.”

By looking at the history of laws and regulations around expatriation, it seems the primary motive with these laws is to stop tax avoidance. But why were individuals trying to avoid taxes? After all, taxes are part of a civilized society. If we dig deeper, legislation often was enacted when tax rates were high or were likely to rise:

What Seems to Be Contributing to the Rise in Expatriation?

In reviewing the laws that discourage expatriation, it is the wealthy that are targeted. Therefore, one thing that is probable is that if corporate, capital gains, dividend, and individual income tax rates rise (which is likely), more of the wealthy will probably expatriate. Furthermore, as more laws are enacted to penalize expatriation, America is likely to suffer because the brain drain effect (attracting the best and brightest to work and come to to the US) will be lessened. As a result, America will see not only less jobs and productivity, but a lower standard of living.

Without a doubt, taxes are a common decision making factor for those Americans that give up their US citizenship. Legislators know this and have put forth US laws and regulations intended to prevent tax avoidance and expatriation. Paying all the taxes you owe as an expatriate or American is the right thing to do. The real question is, what would our founding fathers say? Maybe we shouldn’t we be asking not why we have laws discouraging US citizens from renouncing their citizenship but rather why do Americans want to leave? If we can figure that out, would we need legislation that serves to stop tax avoidance and discourage expatriation?