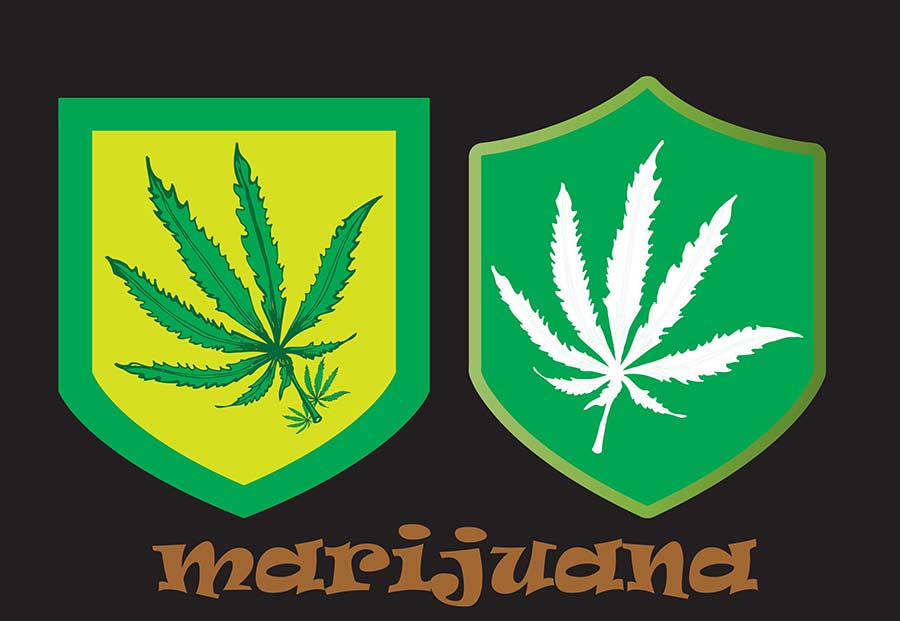 Uruguay is one country that is very close to legalizing marijuana. Political leaders in Uruguay believe the legalization of marijuana will result in less violence, tax savings, and new revenue. The idea of legalizing marijuana though in the United States has been growing in support since the 1970s. Last year Gallup showed half of Americans supported legalizing cannabis. There have been multiple scholarly papers and news articles written about how much the Federal, State, and local governments would benefit financially from legalizing marijuana and taxing it. It is obvious government revenue would increase, and enforcement related costs would decrease. But, about how much are we possibly talking about? We analyzed two popular economists papers on estimated marijuana savings and new tax revenue and adjusted for inflation as to what these number might look like in 2012. How much would legalization help state budgets? One of the most popular papers was written by Jeffrey Miron, an economics professor at Harvard University.1 It had strong support with over 400 economists undersigning it (3 Nobel Laureates) in a letter to President Bush in 2005. The numbers are not dramatic but with a national deficit of 16 trillion and growing, anything that improves our finances is something that needs to be considered, especially if it gives more freedom to the people. All forms of government would realize cost savings according to the study (and most estimates are conservative). Miron estimates that state and local governments would save around $5.3 billion a year, and the Federal government would save around $2.4 billion (based on 2003 numbers). Adjusted for inflation, those numbers today would represent $6.64 million and $3 billion respectively.2 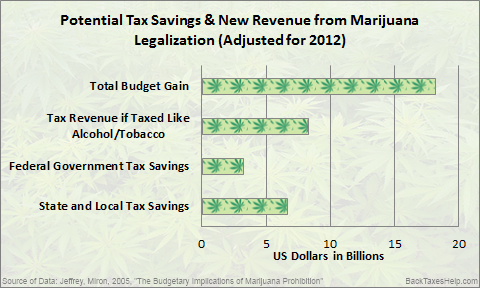 Don’t forget, new taxes would bring new revenue. If Cannabis was taxed as other goods it would yield $2.4 billion annually. If it was taxed like alcohol and tobacco (with a modest sin tax on top of general taxation), it would yield $6.2 billion annually (which Miron bases off of numbers from 2000 and he does not adjust for inflation). Not adjusting for inflation here is important I believe–see the analysis I did on prices from August 2008-August 2012 (see chart here). Combining new tax revenue (assuming it is taxed as alcohol and tobacco) with potential savings across all levels of government would sum to almost $16 billion ($15.84) in today’s dollars (see chart above).

Could Tax Revenues Be Up to $100 Billion

Stephen Easton, a professor of Economics at Simon Fraser University, wrote in 2010 that the revenue numbers could be between 40 billion to 100 billion3. If the government set a tax equal to the difference between the production cost and the street price, the “the government can transfer revenue from organized crime and other small producers to itself by taxing a legal product to the level consumers have already revealed they are willing to pay.” 4 Remember, if marijuana were legalized, production costs would eventually fall, which would make the tax revenue increase further (with superior production techniques as seen in the tobacco industry). Here are few Federal Department budgets tax revenue alone would pay for in 2013 if we assume the Federal Government would get 60% of 100 billion (40% to states and local municipalities):

Even if we go with Miron’s modest estimate on tax revenue (assuming it is only taxed like other goods with the absence of a sin tax), when coupled with enforcement savings, the reduction in red ink is quite large for some states. If marijuana had been legalized from the start of 2012, these states would have lowered their projected 2012 deficits5 by double-digit percentages:

29 other states see a reduction of under 10%. However, what is interesting is that Arkansas, Alaska, West Virginia, and Montana, would end up with surpluses for 2012. Some of these numbers may be larger or smaller when actual budget numbers get reported next year. Legalizing marijuana through regulation and taxation, would minimally help the US Federal Government but would have a much bigger impact on state budgets. Of course, there are other factors and costs that must be considered within the marijuana legalization debate.