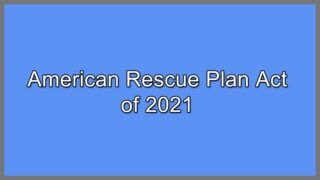 On March 11, 2021, the American Rescue Plan Act became law, and this $1.9 trillion relief package has several components that put money right into the hands of Americans. Wondering how the newest stimulus plan might benefit you and your family? Check out the details below.

The plan includes a provision to send $1400 stimulus payments directly to qualifying Americans. This is the biggest stimulus check issued to date, and although it has stricter income limits than previous payments, it also includes a wider range of dependents.

People with adjusted gross incomes (AGI) under the following thresholds should receive a stimulus check:

This act also authorized the addition of an extra $300 per week to qualifying unemployment recipients. Called Federal Pandemic Unemployment Compensation (FPUC), these payments have been approved to go out from the weeks of March 14 to September 6.

Unemployment recipients with a mix of employment and self-employment income may be able to receive an extra mixed-earned supplement of $100 per week, through September 6 as well. When applying for Medicaid or Children’s Health Insurance Program (CHIP) assistance, the $300 payment is not taken into account, but the $100 payment is considered.

The child tax credit has been increased from $2,000 per child to $3,000 per child over age five and to $3,600 for children age five and under. While this credit only used to apply to children under age 17, it now applies to children through age 17. Additionally, the credit is now fully refundable for couples with an AGI of up to $150,000 per year and for individuals with an AGI up to $75,000 per year.

To put these funds into the economy sooner, the government plans to send advance payments to families, and qualifying recipients may start receiving up to half of their credit as early as July.

For instance, a qualifying couple with two children is eligible to receive a $6,000 credit. They may receive $500 a month in July, August, September, October, November, and December. Then, they should receive the remaining $3,000 as a refundable tax credit when they file their 2021 tax return.

Families with incomes between $125,000 and $400,000 will receive a partial credit worth between 20 and 50% of eligible child care expenses. This is a significant expansion — in the past, this credit was only $1,050 for one kid or double for two or more, and it was only available to people with very low incomes.

Normally, you have to report forgiven liability of $600 or more as taxable income, but this bill says that taxpayers do not have to pay income tax on liability forgiven between January 1, 2021, and the end of 2025.

For instance, if you owe $2,000 on a delinquent credit card and your creditor agrees to let you settle the liability for $1,200, you save $800. Usually, in this situation, your creditor mails you a 1099 at the end of the year, you report the $800 as income, and you face income tax based on your situation. Thanks to this bill, you do not have to report the canceled liability as income.

The bill earmarked $22 billion for emergency rental assistance. These funds replenish the Coronavirus Relief Fund and are distributed through state, local, and tribal governments to people with household incomes under 80% of the area median, in which at least one person is at risk of homeless and someone qualifies for unemployment benefits or faces other economic stress due to the pandemic. Priority goes to families who have been struggling with unemployment for three months or longer.

People who lost their jobs or had their hours cut no longer have to worry about expensive COBRA payments— the government will pay the entirety of COBRA premiums from April 1 to September 30. People who purchase insurance through the exchanges are also going to save, as this bill limits total costs to 8.5% of MAGI through the end of 2022 for these people. The change should be automatic, and recipients don’t need to re-enroll to receive the lower premiums.

The earned income credit (EIC) is often several thousand dollars for people with children, but childless people can usually only receive a maximum credit of $543. For the tax year 2021, this number has been bumped up to $1502, and childless taxpayers can use their 2019 income to qualify if their 2019 income exceeds their 2021 income.

Additionally, the bill also allows childless EIC recipients to have up to $10,000 in investment income. The limit used to be $3650. This new threshold for investment income is permanent and indexed to inflation.

How to Learn More About the American Rescue Plan

For more information on this stimulus bill, check out the following resources.