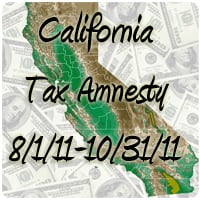 For as long as there have been taxes, there have been people who try to avoid paying them, which is certainly the case in California. However, the Franchise Tax Board (FTB) has been steadily improving its technology and reporting capabilities, so it is getting easier than ever for them to locate taxpayers who avoid or under-report their tax liability.

Thankfully, the California Tax Amnesty program – which runs from August 1, 2011, to October 31, 2011 – can help certain taxpayers who come clean to avoid penalties and criminal prosecution.

The California Tax Amnesty is a voluntary program, wherein the FTB contacted 47,000 taxpayers who may have under-reported their tax liability by failing to report offshore income or by using tax avoidance transactions. The FTB asked these taxpayers to voluntarily come forward and amend their 2010 and older tax returns and pay the taxes and interest in full.

Why California Tax Amnesty is a Good Opportunity

Stepping forward and amending your California tax return to report your full tax liability may seem antithetical, but it is a wise move. After all, the Franchise Tax Board is likely to come after you eventually, which, for you, will result in your being assessed large penalties on top of the taxes and interest that you already owe. Additionally, the FTB may seek criminal prosecution in some cases. By taking advantage of the California Tax Amnesty program, you can avoid a lot of these risks.

There are two scenarios that the Franchise Tax Board is targeting in this year’s California Tax Amnesty program:
An abusive tax avoidance transaction refers to either a “tax shelter” as defined by Internal Revenue Code Section 6662(d)(2)(c), a listed transaction, an undisclosed reportable transaction, a non-economic substance transaction, or a gross misstatement per Revenue and Taxation Code Section 19774.

An offshore financial arrangement generally refers to a transaction that is used to shirk California franchise or income tax liability by utilizing offshore entities or payment cards. Such a transaction is typically made through a debit or credit card that has been issued through a foreign financial institution.

Naturally, the FTB strongly encourages anyone who qualifies for the California Tax Amnesty to come clean. With the way the FTB is capable of sharing information with other agencies, including the IRS, as well as advancements in technology, the FTB is better able to identify taxpayers who may have used these schemes to under-report their tax liability.

For more information, visit the voluntary compliance page of the FTB website or call 1 (888) 825-9868. Taxpayers who are considering the California Tax Amnesty program should consult with a well-qualified tax attorney.