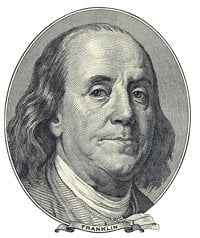 When tax time is looming, Benjamin Franklin’s famous quote about death and taxes is often mentioned. His “Nothing is certain except death and taxes” quote is one of the most enduring quotations from the inventor, politician, writer and founding father.

However, few people really understand why the words were uttered and under what circumstances.

The quote, as it happens, was not uttered in English. It was written by Franklin in French in November of 1789, in a letter to Jean-Baptiste Leroy, a French scientist. Franklin, fluent in French, had once been the U.S. Ambassador to France.

The letter he wrote to Leroy discussed the French Revolution and wished France, and its king, well. He also described the constitution that had recently been accepted and his hopes for its durability. However, he knew that little in the world was truly durable. Out of this came his quote about death and taxes, telling the scientist that these two things are all that really could be counted on with any certainty.

The constitution had been drafted in 1776, and in 1787 it was put in practice by the Constitutional Convention in Philadelphia. The fledgling young government was a great hope to the founding fathers, but its future was still highly uncertain. After two years, Franklin was still worried about it standing the test of time.

Why a French Scientist?

Most of Franklin’s best-known quotes came from his domestic writings, including Poor Richard’s Almanac and assorted essays published in newspapers. His letter to a foreign scientist about his hopes and fears about the new constitution may seem unlikely, but they are actually very much in line with Franklin’s life’s work.

As the U.S. Ambassador to France for nine years, he became a celebrity in the country. He was well known throughout France and much of the rest of Europe, and he used that celebrity to drum up support for the revolutionary cause back home. However, even before his term as ambassador, he was already known in the scientific community of France.

To see why, think back to the image of Franklin flying his kite in the lightning storm. This electricity experiment, as well as others he conducted, had allowed him to be held in high esteem among French scientists. Though Franklin knew nothing of it, Franklin’s kite experiment was conducted about a month after a similar experiment had been conducted in France.

With Franklin and French scientists having much the same interests in electricity, Franklin continued to be held in high esteem 24 years later when he became ambassador to France in 1776. It was in this atmosphere of goodwill as well as the increasingly serious situation in France that spurred Franklin to write his letter.

Franklin and Leroy had been corresponding for many years, but at the time he wrote his famous letter, Franklin had not heard from his friend in more than a year. He feared that Leroy had been killed in the frenzy of executions that had swept France. The letter opened by asking Leroy, “Are you still living?” In the end, it was Franklin who was not to live much longer. He died five months after writing the letter, at the age of 83.